I have been looking on-and-off for a few years already to source a robot arm to power a silly project. I researched buying used and building my own. I also reached out to vendors for a possible loan or sponsorship.

Florentin received a message about a professional smallish arm that was being retired because the controller box appeared dead.

I was very much reminded of this scene from the IT Crowd:

He jumped on the occasion and know we have in our custody one CRS A-465 arm, a C500 controller to go with it, the teaching pendant and various other paraphernalia.

This page is to become the story of that adoption.

Here's a few unredacted pictures of what we were given taken in the spur of the moment. 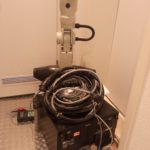 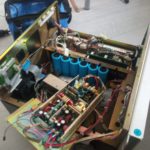 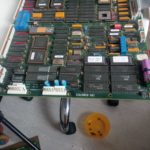 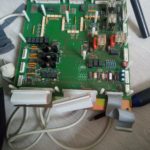 A very quick test showed that the description was indeed correct. Everything appears dead.

When we start looking into things in more details we will propably start at the power supply but we do not at all pretend that we actually know what we are doing. Hopefully enough to not kill anybody.

I have since found an installation manual for the arm:

Looking Inside and Power On

We took a more thorough Inventory and tried to make sense of the innards of the controller. The system has a manufacture-date of 1997.

There is one board for the computer-y aspects of the system. It is run by a 286 CPU accompanied by a 287 FPU. I feel that was outdated when our machine was built, but propably more than powerful enough. There is RAM, firmware in EPROMS some more logic familiar from PCs of the time and a lot of serial connections.

Another board sandwiched with it has more I/O. It is less dense than the CPU board and uses mechanical relays.

There is a standard switching power supply three modules that look like servo controllers, and a large capacitor bank.

A thorough visual inspection did not show up any visible corrosion, no blackened or blown-up components, nothing bulging and no leakage. So we decided to power it up. As described by the donor nothing happened not even the fan is turning.

We checked all the identifiable fuses, of which there are many. All of them are OK.

Then we started tracing power. We found a small board marked Soft Start that apparently is designed to manage the power up sequence to limit large inrush currents. We do not understand the details of how it works.

But there is a large shunt resistor on it with a small component marked F1 in series to it which is mechanically clamped to the resistor body and measures as open circuit. We believe this to be a thermal fuse that has failed.

Maybe that is enough to prevent the system from even starting to power on as the first "trickle" is blocked. If so we could replace that and then would have to find out what made it overheat in the first place. 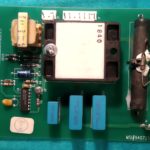 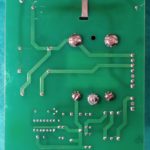 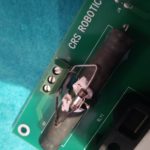